Take on characteristics of any video game.

The power to interact with the world as if in a video game. Opposite to Game Interaction.

User can alter the laws of physics to mimic any and all video games. This power can give the user a wide variety of abilities.

As the creator of every video game ever made, the Lord of Games (Banjo-Kazooie: Nuts & Bolts) is essentially omnipotent while inside one.

Inklings (Splatoon) interact with the world as if it were a video game. 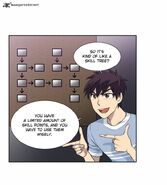 ... and Dan Kuroto/Kamen Rider Genm (Kamen Rider Ex-Aid) Have This Kind of Power.

Wreck It Ralph (Wreck It Ralph) and his friends.
Add a photo to this gallery
Retrieved from "https://powerlisting.fandom.com/wiki/Video_Game_Physics?oldid=1322208"
Community content is available under CC-BY-SA unless otherwise noted.