The ability to manipulate video images. Variation of Data Manipulation.

The user can create, shape and manipulate video images, allowing them to create energy constructs in shape of beings, tools, weapons, aspects of fantasy (such as an NPC, a person from a movie, etc.), and to use powers used in videos like turning invisible and summon mighty weapons. They may also develop the ability to become Digital energy and travel through electronics, wires etc in video form. 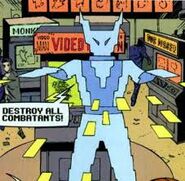 Video-Man(Spider-Man and his Amazing Friends) Firing energy blast via his video manipulation powers
Add a photo to this gallery
Retrieved from "https://powerlisting.fandom.com/wiki/Video_Manipulation?oldid=825781"
Community content is available under CC-BY-SA unless otherwise noted.