Maura (Andromeda) is the avatar of the Abyss.

Possess a symbiotic relationship with a void being.

The power to gain powers through a symbiotic relationship with a void being. Variation of Symbiosis and Universal Force Symbiosis.

The user can gain powers by symbiotically hosting or linking to a void being, such as an embodiment of oblivion, supernatural beings associated with or in charge of nothingness or even entities comprised of null energy. The bond between entity and host can grant potent void abilities, but as with most forms of Symbiosis, it can come with a price. 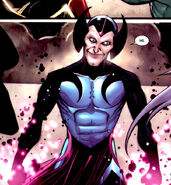 Mark of Cain (Supernatural)
Add a photo to this gallery
Retrieved from "https://powerlisting.fandom.com/wiki/Void_Symbiosis?oldid=1451236"
Community content is available under CC-BY-SA unless otherwise noted.