Power to manipulate the volcanic fields and everything in them. Variation of Environmental Manipulation.

User can create, shape and manipulate the volcanic fields and areas of volcanic activity and everything in them, including all the aspects of the , from the purely physical ones and also mythical/conceptual ones. 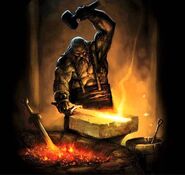 Akainu (One Piece) turning into Magma.

The Firebird (Fantasia 2000) is a spirit of the volcano who destroys all forest life.
Volcanus H.png
Volcanus (Valkyrie Crusade)
Add a photo to this gallery
Retrieved from "https://powerlisting.fandom.com/wiki/Volcanic_Fields_Manipulation?oldid=786672"
Community content is available under CC-BY-SA unless otherwise noted.