Dr. Facilier (The Princess and the Frog), the evil Hoodoo and Voodoo shadowman.

"Voodoo is a very interesting religion for the whole family, even those members of it who are dead."
― Terry Pratchett (Good Omens)

"In voodoo, the demarcation between life and death is more fluid; helping voodoo followers create order out of disorder."
― ‘Gods of Suburbia’: Dina Goldstein’s Arresting Photo Series on Religion vs. Consumerism

The power to utilize voodoo magic. Form of Magic. Practitioners of this trade are often known as bokors, caplata, or witch doctors.

The user can utilize voodoo magic, ie. access supernatural forces to improve their daily lives to attain power or success ("luck") in many areas of life including money, love, divination, revenge, health, employment, and necromancy. As in many other spiritual and medical folk practices, extensive use is made of herbs, minerals, parts of animals' bodies, an individual's possessions and bodily fluids.

Like most Magic, Voodoo Magic has a variety of uses, the most known are Necromancy and using Voodoo dolls (an effigy of a person) for Motor-Skill Manipulation.

• Law of Similarity or "like affects like": model or miniature of a real-world object which affects the real-life counterpart when it is changed. For example, a miniature New York where you can move buildings and they'll move in the real New York. Or a globe (careful with it) if you poke it carelessly, you'll crush the entirety of China.

• Second is Law of Contact/Contagion: that things which have once been in contact with each other continue to act on each other at a distance after the physical contact has been severed. This latter makes someone who knows how to do it right truly dangerous because they can ignore any distance to hurt someone with only a bit of something they have used or (even better) part of them, hair and nail-clippings are traditional for this.

Szayel Aporro Granz (Bleach) can create Voodoo dolls of his opponents in order to attack their insides. 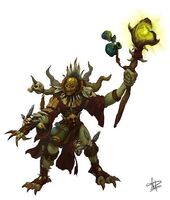 Voodoo Jester (Heroes of Newerth) is a ranged Intelligence hero.

Basil Hawkins (One Piece) using voodoo dolls to transfer damage taken himself to others. 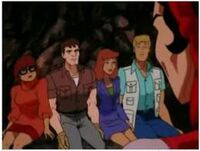 The Four (Scooby-Doo on Zombie Island) are paralyzed by Lena's voodoo magic. 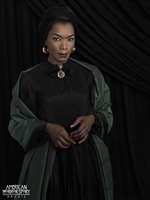 Leonardo (Los Protegidos) can make people lose their memories or cause them physical damage using voodoo. 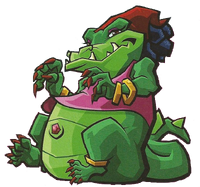 Mz. Ruby (Sly Cooper) was born into a family of mystics as she used her powers to punish the world for fearing her as a child. 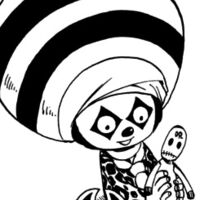 Luca Toyama (Toaru Majutsu no Index) is a Magician who uses a special form of combat linked to Voodoo, as such, she is able to control subjective time, allowing her to change the age of her external appearance and prepare normally once-in-a-decade magic in seconds.

Lao the Keymaster (Grindhouse and Watercolors) was granted the title of "Keymaster" - as well as all abilities and entitlements therein - by the Loas. 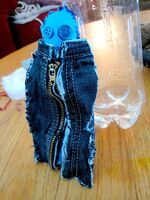 Cho the Gatekeeper (Grindhouse and Watercolors) was granted the title of "Gatekeeper" - as well as all abilities and entitlements therein - by the Loas. 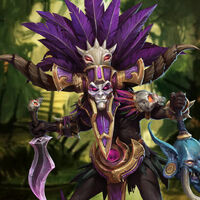 Mama Odie (The Princess and the Frog), the "Voodoo Queen of the Bayou".

Tia Dalma/Caylpso (Pirates of The Caribbean)

As a master of voodoo, LeChuck (Monkey Island series) can use it to turn others into the undead.

A master of Voodoo rites, Punk Mambo (DC Comics) commands many magical abilities and defense, including enhanced senses, astral projection, a cast of illusions and spells, and more; her powers also appear to have arrested her aging.
Add a photo to this gallery
Retrieved from "https://powerlisting.fandom.com/wiki/Voodoo?oldid=1754148"
Community content is available under CC-BY-SA unless otherwise noted.