The user can climb walls and stay unto ceilings. They do not deny gravity, but adhere to surfaces unaided using various ways. However in order to truly be "crawling" on the user must be able to maintain balance for long periods of time, compared to Wallrunning where the energy is only temporary.

Beings with super human strength or super strong and dense claws could simply dig their fingers or into a surface, then propelling upward and digging in again, generating the effect of wall crawling. In some cases, the user may simply be able to make use of any handholds they find, no matter how small, to wall crawl.

Those with Reptilian Physiology could have microscopic setae on their hands and feet like a gecko, or suction pads like a frog. 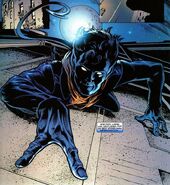 Rogercop (Miraculous Ladybug) is able to magnetically stick to his car by the heels of his feet.

Dragonfly (Superhero Movie)
Add a photo to this gallery
Retrieved from "https://powerlisting.fandom.com/wiki/Wallcrawling?oldid=1413397"
Community content is available under CC-BY-SA unless otherwise noted.