Kratos (God of War), upon becoming the God of War, can use magic imbued with the power of war.

The power to use war-based magic. Form of Magic. Opposite to Peace Magic.

The user can utilize form of magic having to do with war. They user can use spells to bring war upon the land, and possibly make a killing machine out of people.

As the God of War, Ares/Mars (Classical Mythology) is fully capable of combining his Divine Magic with war.

Channeling the powers of their goddess of war, the Cult of Myrmidia (Warhammer) is cable to utilize her power to aid their own warfare efforts. 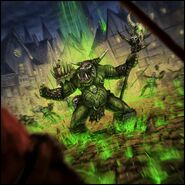 Using their own kind of magic, which they call channeling the power of the "WAAAGH!," the Goblin and Orc shamans of the Greenskins (Warhammer) are able to control the arcane energies around them to devastating degrees. 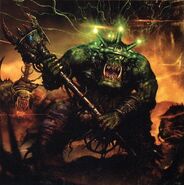 As they are more connected to the Warp than other Orks, Weirdboyz (Warhammer 40K) are capable of channeling the "WAAAGH" to great effect, whether consciously or not.
Add a photo to this gallery
Retrieved from "https://powerlisting.fandom.com/wiki/War_Magic?oldid=1250224"
Community content is available under CC-BY-SA unless otherwise noted.