"My right has been rolled up. My left has been driven back. My center has been smashed. I have ordered an advance from all directions."
― Gen. Foch, letter to Marshal Joffre during the Battle of the Marne.

"Come, Marcus...Let us show these fools how to wage war!"
― Kang the Conqueror (Marvel Comics)

The ability to manipulate war, strife, combat and other forms of conflict. Sub-power of Chaos Manipulation and Interrelation Manipulation. Opposite to Peace Manipulation.

User has the power to influence all forms of conflict including mental, physical, spiritual and conceptual ones, regardless of the area and numbers involved, control how they progress and draw power both from the conflict alone as well as the dying. They are, naturally, extremely skilled in all form of fighting, weapons, and both strategy and tactics as well as statistics of war.

The user can start conflicts by influencing people or events, raise their personal and fanatical armies, control and create weapons of every kind and even grant others extensive abilities of combat. 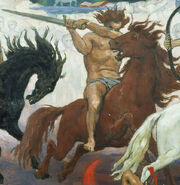 Wonder Woman (DC Comics) inherited Ares's divine abilities after he was forced to relinquish his status as God of War.