The ability to release/use warps in spacetime to various attacks. Sub-power of Warp Manipulation. Variation of Attack Powers.

The user can release/use warps in spacetime to attacks of various shapes and/or intensities, either projected, used as a part of melee attacks, etc. The warps themselves may includes rifts in spacetime, cracks in spacetime, portals, wormholes and the like. 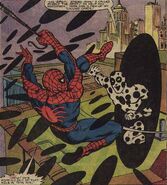 Johnathon Ohnn/Spot (Marvel Comics) can unleash his warp spots on his opponents.
Add a photo to this gallery
Retrieved from "https://powerlisting.fandom.com/wiki/Warp_Attacks?oldid=1314681"
Community content is available under CC-BY-SA unless otherwise noted.