Our very own universe can condense and expand itself into creating or destroying matter.

The ability to bend and contort elemental matter to achieve any number of desired effects. Sub-power of Subatomic Manipulation. Combination of Telekinetic Teleportation and Elemental Manipulation.

User can create, shape and manipulate elemental forces to accomplish amazing feats. Much like Spatial Manipulation, the ability itself is derived from the user's own force of will and depends highly on imagination. Any form of matter is surrounded by an element of the user's choosing and is manipulated as such. Some extremely high level users may be able to bend ambient energy, human emotion, and/or conscious thought.

Structured atoms can bend and contort to meet a specific purpose.

The King of the Gods is an all powerful user of this ability.

An unborn Wyatt Halliwell (Charmed) could even contort and bend the powers of his feuding parents. 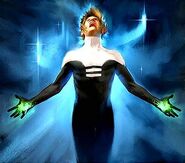 Element Lad's (DC Comics) power over every existing element grants him this ability.

Being one with cosmic forces makes the Silver Surfer (Marvel Comics) a powerful user of this ability.

Kenshi (Mortal Kombat) is a blind but powerful psionic. 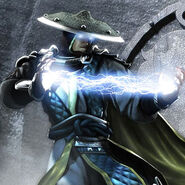 Using his godly powers over thunder, Raiden (Mortal Kombat) can bring anything he desires into existence.
Add a photo to this gallery
Retrieved from "https://powerlisting.fandom.com/wiki/Warping?oldid=1711537"
Community content is available under CC-BY-SA unless otherwise noted.