The Celestial Spirit King (Fairy Tail) not only stopped time but altered reality when he made his presence known in earthland.

Create a field that warps reality.

The power to create a field that warps reality. Sub-power of Reality Randomization. Variation of Effect Field Projection and Other Aura.

User can generate a field that warps reality around them. 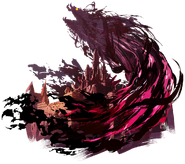 Calamity Ganon (The Legend of Zelda: Breath of the Wild)

Zak Monday's (The Secret Saturdays) mere presence causes reality to shift, twist and breakdown the longer he stays in one place.

Using the power of the Phantom Ruby, Infinite (Sonic Forces) casts a field of effect that grants him absolute control over reality for anything caught within it, casting a world of illusion that becomes tangible reality for all afflicted.
Add a photo to this gallery
Retrieved from "https://powerlisting.fandom.com/wiki/Warping_Presence?oldid=1509546"
Community content is available under CC-BY-SA unless otherwise noted.