Create bow and arrows from water.

The ability to create bow and arrows from water. Sub-power of Hydrokinetic Constructs. Variation of Elemental Bow Construction.

The user can construct bows (including crossbows) and arrows from nothing or by shaping the existing water allowing them to attack from distance. Depending on what the weapon is made of, it can posses a variety of abilities and be very effective in both offensive and defensive combat.

Madoka/Cure Selene (Star Twinkle Precure) can create bows and arrows made of water with her Aquarius Star Color Pen. 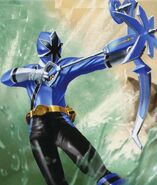