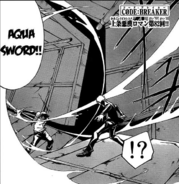 Titanosaurus (Dinosaur King), one of the sauropod dinosaurs that can call up a giant blade of water and send it forward to slice through your opponent.

Katara (Avatar: The Last Airbender) Water Cutting A Swamp Monster.
Add a photo to this gallery
Retrieved from "https://powerlisting.fandom.com/wiki/Water_Cutting?oldid=1375589"
Community content is available under CC-BY-SA unless otherwise noted.