As a guardian made from water, Guardian ÄRM, Undine (Marchen Awakens Romance) can create water in different forms.

User is able to generate water.

Timmy's Dad (The Fairly OddParents) can generate a torrent of water from anything as long as he is wielding a monkey wrench.

Among his other powers, Sharkboy (The Adventures of Sharkboy and Lavagirl) can fire jets of water from his hands.

The Orb of Tornami/Torpedo (Xiaolin Showdown) allows the user to unleash water from its tiny mouth.

One of the 100 Mamodo teams fighting to become the new ruler, Penny and Uri’s (Zatch Bell!) spells generate water.

As The Guardian of Water Irma Lair (W.I.T.C.H) can manipulate and generate water. 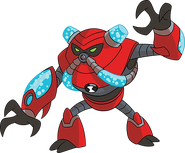 Syren (Miraculous: Tales of Ladybug & Cat Noir) generating water through her tears.
Add a photo to this gallery
Retrieved from "https://powerlisting.fandom.com/wiki/Water_Generation?oldid=1496450"
Community content is available under CC-BY-SA unless otherwise noted.