The ability to teleport via water and water sources. Technique of Water Manipulation. Variation of Elemental Teleportation.

The user can teleport via water, merging into a body of water of any size and appearing anywhere else from the same element. 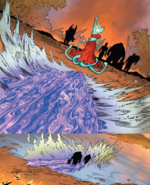 Dancing Water (Marvel Comics) is able to open gateways on surfaces of water that can transport herself and several others across great distances.

Akira Okochi (Negima) can transport through any body of water with her pactio artifact Siren Valida. 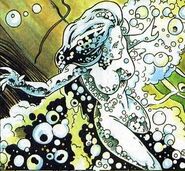 Aquamaria (Static Shock) can teleport with water.
Add a photo to this gallery
Retrieved from "https://powerlisting.fandom.com/wiki/Water_Teleportation?oldid=1651505"
Community content is available under CC-BY-SA unless otherwise noted.