Walk or run on the surface of water.

The power to walk and/or run on the surface of the water. Sub-power of Water Manipulation.

Being able to move across the surface of water without going into it has been shown to exist in real life. Insects known as Hemiptera can stand and move across water, they can also move fast thanks to their ability to “glide” on water. Humans are actually able to run on water with enough speed and mastery of leg strength, however, humans eventually fall in in swift time, so humans can only cross ponds and small rivers without falling in.

Jesus Christ (Christianity) of Christian theology is a famous user of this ability...

... even within great storms he stood strong.

Barry Allen/The Flash (Arrowverse/DC Comics) is so fast he can run on water.

The Forest Spirit (Princess Mononoke) can walk on water.

All standard Shinobi (Naruto) can walk on water by focusing their chakra into their feet.

Naruto Uzamaki and Sasuke Uchiha (Naruto) fighting on the surface of water.

Brook (One Piece) is able to run on water due to his speed and light weight. 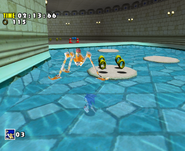 Captain Armando Salazar (Pirates of the Caribbean) and his crew of the Silent Mary were able to walk/run on water because they are cursed ghost with several supernatural abilities.

Lion running on water with Steven and Connie(Steven Universe)
Community content is available under CC-BY-SA unless otherwise noted.
Advertisement