The ability to release waves of energy/matter. Sub-power of Attack Powers.

User can release waves, spirals, rings, pulse, blasts, balls, and bursts of energy/matter (whether organic, inorganic, objects, etc.), and use them to damage, push, bind and/or paralyze people. They are able to send the energy/matter through any form of matter creating ruptures, and create a pulse elements that can go through anything, and depending on what the user want it can either be harmful or harmless. 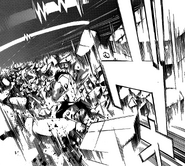 Blackfire (DC Comics)
Add a photo to this gallery
Retrieved from "https://powerlisting.fandom.com/wiki/Wave_Emission?oldid=1380798"
Community content is available under CC-BY-SA unless otherwise noted.