Launch a massive beam of energy/matter.

"When out of ideas, just make a weapon firing a large beam."
― Velocithor V2-10 flavor text.

The ability to launch a massive wave of energy/matter at a target. Sub-power of Attack Powers.

User can emit/release enormous and destructive wave of energy at a desired target and most likely destroy the surrounding area.

Shizuri Mugino (A Certain Magical Index) using her Meltdowner, which is a "Particle Waveform High-Speed Cannon".

Ichigo Kurosaki (Bleach) unleashing Getsuga Tenshō, a torrent of spiritual energy slashing through anything in its path.

Some Cross Marks (Code:Breaker) have the ability, Wave Motion, which they indiscriminately release a stream of energy from their mouths.

Tyki Mikk (D.Gray-Man) using his Choose ability to reject atmospheric air in a specific area, firing it off in a very destructive and widespread blast.

Superman (DC Comics) is capable of incinerating planets with his Heat Vision, when enough power is put into it.

Cell (Dragon Ball) fires his Solar Kamehameha, so named because it has the power to obliterate an entire solar system.

Hirudegarn (Dragon Ball Z: Wrath of the Dragon) uses his Gigantic Flame to exhale a massive burst of fire.
Kaze no Kizu.png
InuYasha (InuYasha) using his Kaze no Kizu to fire off a powerful wave of demonic energy that can slay 100 demons in one strike.

Inuyasha (InuYasha) using Bakuryūha to combine Kaze no Kizu with his enemy's attack to create a deadly wave of energy.

When he had four Shikon Jewel shards embedded in his Banryū, Bankotsu (InuYasha) could channel their power to unleash his Dragon Hammer, releasing a destructive wave of energy that rivaled Inuyasha's Wind Scar.

When he possessed seven Shikon Jewel shards, Bankotsu (InuYasha) was able to channel their power into his Banryū to fire off his Heat Blast, cancelling out Inuyasha's Wind Scar.

Having beheaded 1000 humans and 1000 demons, Bankotsu's (InuYasha) Banryū became a demonic weapon. This, combined with the power of the Shikon Jewels in his weapon, allowed Bankotsu to channel the layers of power to unleash his 'Banryū Flash', a powerful wave of energy that was capable of completely overwhelming Inuyasha's Wind Scar.

Sesshōmaru (InuYasha) releasing the corrosive aura of his Bakusaiga in a in a massive wave.

Gamera (Kaiju series) can summon Mana Energy from the Earth, before unleashing it in the form of his Ultimate Plasma.

Twilight Sparkle (My Little Pony: Friendship is Magic) using a powerful and expanding magic blast in her fight against Lord Tirek.

Kurama (Naruto) compresses his Tailed Beast Ball in his mouth and then fires it in the form of a massive energy beam.

Enel (One Piece) releasing powerful blasts of electricity in forms of widespread waves.

El Drago (One Piece) using his Goe Goe no Mi to scream out a powerful beam of sound that can destroy anything in its path, though it can be reflected. 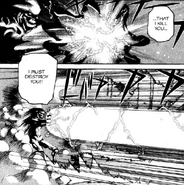 When powered by all seven Chaos Emeralds, the Eclipse Cannon (Sonic the Hedgehog) can fire energy beams capable of piercing stars and destroying entire planets. 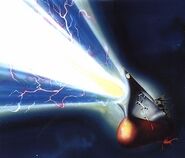 Yamato (Space Battleship Yamato) firing its Wave Motion Gun, which is the signature weapon that gave this ability its name.

Ryu (Street Fighter) using one of his trademark attacks, the Shinku Hadoken, a powerful beam of Ki that can strike multiple times and destroy weaker projectiles. 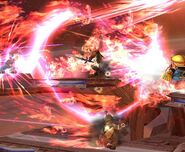 Chrio (Super Robot Monkey Team Hyper Force Go!) is able to channel it in the form his Monkey Fu as he is gifted with the energy of the Power Primate.

The Subspace Gunship (Super Smash Bros. Brawl) fires a very powerful blast that can infinitely rend space, sending everything it hits into the void of subspace.