The power to manipulate weak force. Sub-power of Fundamental Forces Manipulation and one of the two forces of Nuclear Manipulation.

The user can manipulate the weak force, one of the four fundamental forces of nature that underlies some forms of radioactivity, governs the decay of unstable subatomic particles such as mesons, and initiates the nuclear fusion reaction that fuels the Sun. As such, the Weak Force is believed to be why the Sun can provide the Earth with energy. Through this power, a user will generate and control different types of radiation. 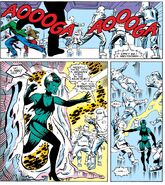 Halflife (Marvel Comics), an extraterrestrial with the ability to control the "Weak Force".
한국어
Community content is available under CC-BY-SA unless otherwise noted.
Advertisement