Enter into a weakened transformation.

The ability to transform into a weakened state with lowered/lost powers. Variation of Mode Switching.

The user can enter a weakened state where one's innate powers are drastically lowered and abilities are lost, possibly only when they are beaten or in a already dangerous situation in order to avoid defeat or death.

As a result of his father's restraining crown on his forehead, Broly (Dragon Ball Z: Broly - The Legendary Super Saiyan) takes on a weakened Super Saiyan form.

Medaka Kurokami's (Medaka Box) Forsaken God Mode is specifically meant to make her weaker than her opponent, no matter how weak her opponent may be. 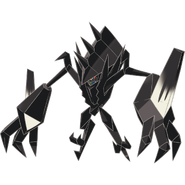 Necrozma's (Pokémon) current form is a weakened, crippled one after most of its power was forcibly taken.
Add a photo to this gallery
Retrieved from "https://powerlisting.fandom.com/wiki/Weakened_Form?oldid=1328138"
Community content is available under CC-BY-SA unless otherwise noted.