When combined with the Stone Mask, The Red Stone of Aja (JoJo's Bizarre Adventure) can remove a Pillar Man's weakness of the sun & Hamon/Ripple, transforming them into a perfect being.

"To strengthen what is weak. Make hard what is soft."
― Ting Wang (Johnny English Reborn)

"Weakness must be cast aside for the sake of power."
― Thanos (Marvel Cinematic Universe)

The power to remove the weakness of anyone/anything. Sub-power of Weakness Manipulation. Opposite to Weakness Inducement and Advantage Removal.

User can remove the limitations/weaknesses of anyone/anything, allowing them to bestow powers such as immortality, invulnerability, perfection and possibly more. Depending on the weaknesses removed, the effect may be either permanent or temporary.

When worn, the Gem of Amara (Buffy the Vampire Slayer) removes all of a vampire's weaknesses, such as sunlight and wooden stakes.

Through mass absorption of solar energy, the Superman of the Kingdom Come universe (DC Comics: Kingdom Come) was able to remove his weakness to Kryptonite.

Through extensive training, Saiyans (Dragon Ball series) like Son Goku are able to remove their longtime weakness of having their tails squeezed.

The Bat Gremlin (Gremlins 2: The New Batch) removed itself of its vulnerability to sunlight after being modified with genetic sunblock.

By consuming the soul of his brother Rahab, Raziel (Legacy of Kain) was able to remove his vulnerability to water, enabling him to survive immersion in water and thus swim.

Evangeline A.K. McDowell (Mahou Sensei Negima) was once vulnerable to sunlight, but was able to remove said vulnerability as she became more powerful.

While Samus Aran (Metroid) was initially vulnerable to cold due to being treated with the Metroid vaccine, she was able to rid herself of that weakness upon acquiring the Varia Suit.

When HIM (The Powerpuff Girls) revived the Rowdyruff Boys, he added a cootie vaccination, not only removing their weakness to the kisses that killed them before, but causing them to grow bigger with each one.

Through repeated exposure to the Anti-Blacklight Toxin Bloodtox, Alex Mercer (Prototype) was able to remove his vulnerability to it. 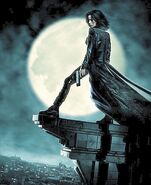 After drinking the blood of Alexander Corvinus, Selene (Underworld) was able to remove her vulnerability to sunlight.

By repeatedly ingesting vervain-laced liquids, Katherine Pierce (The Vampire Diaries) was able to remove her vulnerability to it.

After acquiring the Red Stone of Aja, Kars (JoJo's Bizarre Adventure Part II Battle Tendency) rid himself of his vulnerability to sunlight & Hamon/Ripple.

Using the magic of the Darkhold, Carnage (Marvel Comics) was able to remove his weakness to sonic vibrations.
Add a photo to this gallery
Retrieved from "https://powerlisting.fandom.com/wiki/Weakness_Removal?oldid=1746959"
Community content is available under CC-BY-SA unless otherwise noted.