The ability to fuse multiple weapons into a single one. Sub-power of Weapon Manipulation. Variation of Fusionism.

User can combine two or more weapons into a single weapon, usually larger and more powerful.

Shu Ouma (Guilty Crown) can combine the Voids of others into a single weapon; here, he has combined the Voids of Kenji Kido and Inori Yuzuriha into a massive energy cannon.

Alexandrite (Steven Universe) is able to use the various weapons of the four gems that she is composed of, including the various variations of fusions between them.

Obsidian (Steven Universe) fuses the weapons of all the Crystal Gems into a giant sword. 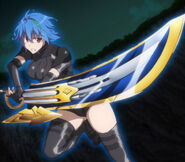 Chuck Greene (Dead Rising series) Can combine a paddle and a chainsaw, making a Paddlesaw

Using his own Demonic Power as a catalyst Dante (Devil May Cry series) fused the fragments of the Rebellion with the Sword of Sparda...

...creating the more powerful Demon Sword Dante which contains both his father’s and his own power.
Add a photo to this gallery
Retrieved from "https://powerlisting.fandom.com/wiki/Weapon_Combination?oldid=1672650"
Community content is available under CC-BY-SA unless otherwise noted.