User is able to create beings of weapons or shape existing weapons into wanted shapes and purposes. They can grant the beings varying levels of independence (controlled, automatons/programmed, semi-independent) and existence (momentary to permanent) and delete the creature once they are done with them. 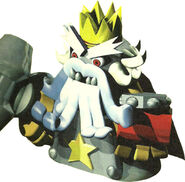 Smithy (Super Mario RPG: Legend of the Seven Stars)
Add a photo to this gallery
Retrieved from "https://powerlisting.fandom.com/wiki/Weapon_Creature_Creation?oldid=1509626"
Community content is available under CC-BY-SA unless otherwise noted.