Daz Bones (One Piece) can turn his hands into sharp and deadly blades due to eating the Supa Supa no Mi.

The ability to grow a weapon onto arms using energy or surrounding matter. Sub-power of Organic Constructs. Variation of Ersatz Body Part. Opposite of Weaponized Feet.

User can transform parts of their body to form a weapon of their choice onto their hands and forearms, possibly their biceps, triceps, and shoulders.

The Flat Sisters (Marchen Awakens Romance) can change their hands into blades with the Ghost ÄRM, Scalpel.

General (Marchen Awakens Romance) can change his hand into a weapon depending on the side Pause's Ghost ÄRM, Verfile lands on.

Sarah Band (Marchen Awakens Romance) possess a Ghost ÄRM that turns her hand into a scythe. 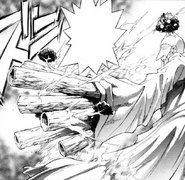 A walking arsenal, Franky (One Piece) houses various forms of artillery weaponry within his arms like his Weapons Left, a powerful machine gun...

Baby 5 (One Piece) can change her hands into any weapon due to her Buki Buki no Mi powers.

As a Parasite, Migi (Parasyte) can change and shapeshift into various forms of bladed weaponry.

James Heller (Prototype 2) is a notable user of this ability. 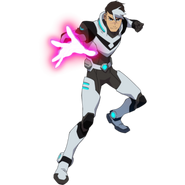 Takashi "Shiro" Shirogane can infuse energy generated from his robotic arm into his hand to use as an energy blade. 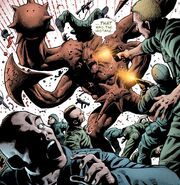