Shigure Kosaka (Kenichi: The Mightiest Disciple) can enter a mode were her weapons become more powerful and deadly via "Soutou Kyorenzan".

Go into a weapon mode.

The power to go into a mode made for weaponry. Variation of Combat Mode and Mode Switching.

Users can go into a mode or form made for weapon usage, increasing all the weapon powers and skills of the user to their apex, and possibly grant to them new powers/skills made for their weapons. 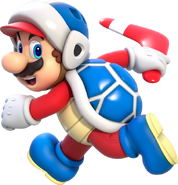 Mega Man X's (Mega Man X) Blade Armor centers around the usage of the Z-Saber.
Add a photo to this gallery
Retrieved from "https://powerlisting.fandom.com/wiki/Weapon_Mode?oldid=1495061"
Community content is available under CC-BY-SA unless otherwise noted.