Alice (Resident Evil Movie Series) can use anything she sees as a weapon and considers everything she touches once as a deadly one whether it's human-made or not.

Turn anything or anyone one touches into a weapon.

The power to turn things and other objects (even beings) into personal weapons just by touching them. Combination of Weapon Transformation, Ability Intuition, Intuitive Aptitude and Improbable Weapon Proficiency.

The user is able to turn objects/beings/things/weapons into a usable, durable, and advanced personal weapon for combat, defense, offense and fighting purposes. Whatever the user touches (in the case of objects and things without powers and those beings without abilities), instantly gains an extraordinary skill or enhancements for fighting and battle.

Chan Ka Kui (First Strike Movie) using a ladder to defeat those who are surrounding him on this one scene of the movie.

Manta Oyamada with a toy hammer and Mosuke, Manta's Guardian Spirit (Shaman King) holding a hammer with a wooden handle engaging into battle.

Berserker/Lancelot (Fate/Zero) is able to turn anything he touches into enhanced magical weaponry.

The Gandalfr Runes (Zero no Tsukaima) grant their wielder absolute mastery of any weapon designed for combat. 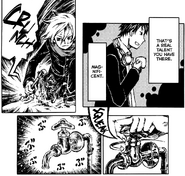 After gathering his courage, Tsutsuji Amedome (Vanilla Spider) instantly unlocked the hidden power of the Faucet...

...slicing an Elevator alien in half during his first battle.
Add a photo to this gallery
Retrieved from "https://powerlisting.fandom.com/wiki/Weapon_Proficiency_Touch?oldid=1570734"
Community content is available under CC-BY-SA unless otherwise noted.