The power to summon a weapon from anywhere. Sub-power of Weapon Manipulation, technique of Summoning.

Darklighters (Charmed) can summon their crossbows and poisonous arrows.

In contrast to Ladybug's "Lucky Charm" ability, Antibug (Miraculous Ladybug) has the power of "Anti-Charm"... 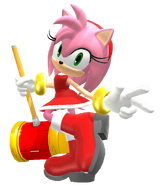 Gems (Steven Universe) have personal weapons they can summon at will. These include Amethyst's whip, ...

Weapon Master (Valkyrie Crusade) can summon millions of swords.
Add a photo to this gallery
Retrieved from "https://powerlisting.fandom.com/wiki/Weapon_Summoning?oldid=786789"
Community content is available under CC-BY-SA unless otherwise noted.