Maka (Soul Eater) is a rare case of a non weapon that can use this power.

Turn anything into weapons.

The power to transform matter into weapons. Sub-power of Transmutation. Technique of Weapon Manipulation.

The user can transform beings (possibly including themselves) and/or objects (including weapons) into weapons. 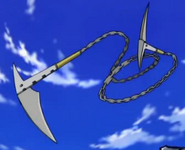 Darkray (Kurohime) wielding his six Death Angels - Sword, Axe, Lance, Mace, Hammer and Dagger - all of whom can take on weapons of their namesakes.
Add a photo to this gallery
Retrieved from "https://powerlisting.fandom.com/wiki/Weapon_Transformation?oldid=786791"
Community content is available under CC-BY-SA unless otherwise noted.