Scorpion's (Marvel Comics) cybernetic tail is equipped with such weapons as lasers and acid.

The user has a tail that has been weaponized in some way. 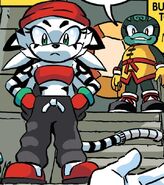 Jian the Tiger (Archie's Sonic the Hedgehog), has a hidden blade built into her cyberized tail that she can produce from her tail tip.

The Tryple Strike (Dreamworks Dragons) is a gargoyle-like dragon with three scorpion-like tails that curl into a single tail.

Shin Godzilla (Godzilla) firing an atomic beam from his tail.

After his original tail was severed by Ruby, Tyrian Callows (RWBY) gained a cybernetic one.

Willosaurs (Spore E3 2005) are able to effectively use the clawed hands on their tails to strike prey items into submission.

Lala Satalin Deviluke (To Love-Ru) fires a laser from the tip of her tail.

Bambina (Toriko) can use his tail to deliver razor winds that can reach far enough to cut orbiting asteroids and satellites in half.
Add a photo to this gallery
Retrieved from "https://powerlisting.fandom.com/wiki/Weaponized_Tail?oldid=1406822"
Community content is available under CC-BY-SA unless otherwise noted.