Discord (My Little Pony series) can control the weird nature of his dimension.

"I hate it when the things he says that don't make sense "make" sense."
― Thief (8-Bit Theater)

The ability to manipulate what is weird. Opposite to Normalcy Manipulation.

User can manipulate weirdness, making weird events and other things happen that do not normally happen in the universe. They can make weird things normal and vice versa, but cannot manipulate what else is normal, only what is weird to begin with can be affected.

See Also: Reality Is Out To Lunch.

Bill Cipher (Gravity Falls), within the confines of Gravity Falls, was able to unravel the fabric of reality and induce weirdness on a near cosmic scale, inducing a cataclysmic event known as "Weirdmageddon". 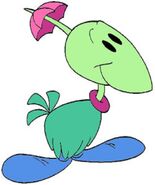 Gogo Dodo (Tiny Toon Adventures) embodies the sheer insanity and craziness that makes cartoon characters what and who they are.

The Addams Family (The Addams Family)
Add a photo to this gallery
Retrieved from "https://powerlisting.fandom.com/wiki/Weirdness_Manipulation?oldid=1509663"
Community content is available under CC-BY-SA unless otherwise noted.