Cornell (Castlevania: Lords of Shadow) is the Dark Lord of Lycanthropes.

The user either is or can transform into a Werebeast Lord, the most powerful form of werebeast imaginable. Unlike most werebeasts, the werebeast lord may possess unimaginable skill in fearsome dark magic, and may command legions of werebeasts.

Also, werebeast lords are known to have a certain resistance to silver for prolonged periods of time and have the fewest weaknesses. Furthermore, depending on the user, they may have a demonic nature, thus granting them access to the most unholy of powers. 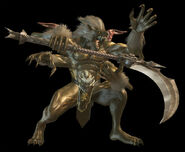 Scott McCall (Teen Wolf) has strength, speed and stamina superior to most alphas due to his true alpha status.
Add a photo to this gallery
Retrieved from "https://powerlisting.fandom.com/wiki/Werebeast_Lord_Physiology?oldid=1633201"
Community content is available under CC-BY-SA unless otherwise noted.