Use the abilities of werepires.

The ability to use the abilities of werepires. Variation of Hybrid Physiology. Combination of Werebeast Physiology and Vampire Physiology.

User of this power either is or can transform into a Werepire, a hybrid of a vampire and any type of werebeast which is capable of using all the powers of both parent species and (in most cases) using them to enhance each other. These hybrids often have an immunity to several weaknesses that their parent species have, such as: silver, gold, sunlight, but something that affects both parent species may still affect them (decapitation). 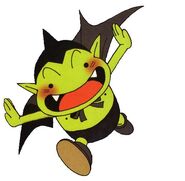 Paifu (Cowa!) is half-vampire, half-werekoala.
Add a photo to this gallery
Retrieved from "https://powerlisting.fandom.com/wiki/Werepire_Physiology?oldid=1509671"
Community content is available under CC-BY-SA unless otherwise noted.