Carrot (One Piece) transforming into her Sulong form underneath the full moon.

Use the traits of Were-Rabbits.
The power to use the abilities of a were-rabbit. Variation of Werebeast Physiology and Lagomorph Physiology. 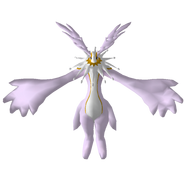 Kagura (Gintama) is of the Yato Clan, and she claimed she can transform into a giant rabbit when looking at the full moon.

Enid's (OK K.O.! Let's Be Heroes) transformation into a wererabbit.

Takeshi Tomoe (Project ARMS) utilizing his White Rabbit ARMs to take the form of a humanoid rabbit that can fly.

Wallace (Wallace & Gromit: The Curse of the Were-Rabbit) accidentally turned himself into a Were-Rabbit due to an experiment went wrong, transforming at night.
Add a photo to this gallery
Retrieved from "https://powerlisting.fandom.com/wiki/Wererabbit_Physiology?oldid=1572195"
Community content is available under CC-BY-SA unless otherwise noted.