Conqueror/Haoshoku Haki Users (One Piece) like Silvers Rayleigh use their willpower in order to overwhelm their opponents.

Have your willpower link to your powers.

The ability to have one's willpower linked to one's powers. Variation of Self Power Link.

The user can make their willpower connect to their powers and use it to control them. The willpower/ambition fuels the powers and allows them to be strengthened and utilized on various levels.

Orihime Inoue's (Bleach) powers are directly connected to her strength of will; she's exactly as powerful as she believes she is, and becomes weaker from feelings of doubt.

The Green Lantern Corps (DC Comics) are all powered by their strength of will. 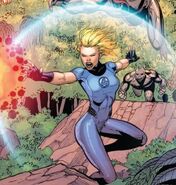 Samus Aran's (Metroid) Power Suit is tied to her strength of will; at times of extreme physical or emotional stress, her suit malfunctions and she's unable to maintain it.

Proving he had the qualities of a king, Donquixote Doflamingo (One Piece) awoke his Conqueror/Haoshoku Haki at the age of 9.

With willpower matching his endless ambition and strength, Monkey D. Luffy (One Piece) uses Conqueror/Haoshoku Haki to overwhelm his opponents...

...contending with some of the world's deadliest pirates like Donquixote Doflamingo of the Seven Warlords of the Seas...

...and Charlotte Katakuri, the second strongest member of the Big Mom Pirates.

Lapis Lazuli (Steven Universe)
Add a photo to this gallery
Retrieved from "https://powerlisting.fandom.com/wiki/Willpower_Link?oldid=1675780"
Community content is available under CC-BY-SA unless otherwise noted.