Cailleach Bheur (Celtic Mythology) personification of winter, mother of all the gods.

Manipulate the essence of winter.

The power to manipulate the season of winter and the concepts of cold, snow, death and solitude. Variation of Season Manipulation. Opposite to Summer Manipulation.

User is able to tap and induce the winter and the powers/forces it represents: snow and ice, cold, death and solitude. It is also time of endurance and survival with any means possible, waiting, reflection and preparation for the upcoming growth season.

Elsa the Snow Queen (Frozen) has magical abilities powerful enough to plunge her kingdom into an eternal winter.

Ingrid (Once Upon a Time) has all the same powers as her niece Elsa, but with more experience and evil intentions.

Lumi the Snow Queen (Fables) is a seasonal goddess and mistress of winter. 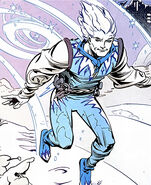 Jack Horner (Fables) after tricking the Snow Queen into given him her power.

Skadi (Valkyrie Crusade) the goddess of ice, snow and winter.

With the Demon's Extract Esdeath (Akame Ga Kill) can create a Russian winter...

...that encompasses an entire continent...

...which will eventually freeze all its inhabitants to death.

Winter fairies (Disney Fairies)
Add a photo to this gallery
Retrieved from "https://powerlisting.fandom.com/wiki/Winter_Manipulation?oldid=1665397"
Community content is available under CC-BY-SA unless otherwise noted.