Walter C Dornez (Hellsing) wielding a set of ten monomolecular wires as though they are extensions of his own body.

The ability to use wires with great skill. A variation of Weapon Proficiency.

Users demonstrate natural aptitude for the way of using the wire or thread as weapon/tool. They can wield a wire or thread with great proficiency in range, accuracy and speed allowing them to perform feats such as wrapping then pulling things or bringing them closer, binding their opponents, scaring/lashing opponents, binding then snatching others weapons, swinging from high altitudes and slicing the flesh of their enemies when striking at great speed.

Kaori Kanzaki (A Certain Magical Index) is skilled with wires, and can use magic to split seven of them into thousands to cut her opponents.

Lubbock (Akame Ga Kill!) using Infinite Uses: Crawstail to manipulate wires made out of a Danger Beast's hair in so many versatile ways, and even hide them inside his mouth.

Alice Fuji (Arachnid) using her Spider's Thread weapon that launches hooked blade with thread attached to it, which she uses skillfully for traps, offenses, defenses, detection, and collecting air bubbles.

Yashamaru (Basilisk) wields his Black Ropes, women's hair given alchemical treatment with animal oils for steel consistency, like extension of his own body, piercing, flaying or binding his opponents.

Jenos Hazard (Black Cat) wielding his Excelion, which contains indestructible Orichalcum wires that he can use to cut anything or skillfully hold without harming.

Rika Aragami (Corpse Princess) uses claws to rake someone's face, and can fire off wires to bind them in place.

Machi (Hunter X Hunter) forming her Nen Threads that she can use masterfully for attacks, bindings or traps.

Yura (InuYasha) using the hair of her victims, amassed over the years, to masterfully attack, control, track, and reattach limbs, and can even set them on fire to burn her foes.

Renkotsu (InuYasha) using steel threads to capture his enemies, and setting them on fire with oil to burn them alive.

Nao Yūki (My-Hime) wields dual metal claws with metal wires that she can use to ensnare and cut her targets.

Sasuke Uchiha (Naruto) using translucent and elastically durable wires to manipulate the trajectory of shurikens with many tactics possible.

Kidōmaru (Naruto) using his stronger-than-steel spider webbing threads to capture his enemies, compress for weapons and create a network alarm.

Kushimaru Kuriarare (Naruto) using Nuibari, a longsword with a long wire, to pierce and bind a bundle of corpses together in a skillful and gruesome manner.

Kubinashi (Nurarihyon's Grandson) using his Ayatori String Technique to capture and kill his targets with great control over a strong thread.

Donquixote Doflamingo (One Piece) can use his strings to cut through matter, swing through the clouds, manipulate people, create a clone and force-field. 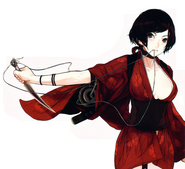 Kurenai (Red Ninja: End of Honor) has mastered using her Tetsugen as a weapon, the very wire that once nearly took her life. 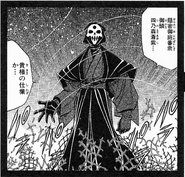 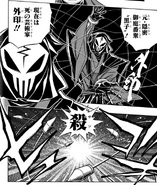 Gein (Rurouni Kenshin: Restoration) utilizing his wires with launcher darts at his fingertips to fire them off at high speed.
Add a photo to this gallery
Retrieved from "https://powerlisting.fandom.com/wiki/Wire_Proficiency?oldid=786854"
Community content is available under CC-BY-SA unless otherwise noted.