Pirika (Chain Chronicle) is the incarnation of the World's Will, which gives her such a deep physical and spiritual connection to everything in it that if she ever dies the world will be thrown into utter chaos.

Have a connection with the world.

The power to have a deep physical/spiritual connection to the world. Advanced variation of Ecological Empathy and Elemental Connection. Lesser version of Transcendent Connection.

User has a deep physical, mental, emotional or spiritual connection with the world and everything in it including all its countless lifeforms, elements, aspects, etc., allowing them a deep understanding of the world, what it can do, and how it applies to them. This can allow them to easily communicate with the world that they have a deep connection with.

User is able to sense and/or know everything that happens on the world they have a connection too.

Ryu Bateson (Breath of Fire II) can connect with the world and everything that exists on and within it via the power of Anfini. 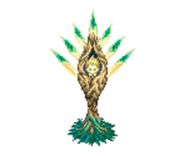 As the child of the goddess of mana, the Scion of Mana (Children of Mana) has such an incredibly deep connection to the world that he and it are essentially one and the same, allowing him to not only communicate with it but also decide all that happens to it.
Add a photo to this gallery
Retrieved from "https://powerlisting.fandom.com/wiki/World_Connection?oldid=1509745"
Community content is available under CC-BY-SA unless otherwise noted.