Scorpion (Mortal Kombat), a wraith of the Netherrelam.

Take on the characteristics of a wraith.

The power to use the abilities of a wraith. Variation of Spirit Physiology and Ghost Physiology.

User with this ability either is or can transform into a wraith, an incorporeal evil spirit from the netherworld - distinct from demons - that drains the life energy of mortals in order to sustain their existence and may be able to steal souls as well. Typically wraiths appear as shadowy forms wrapped in robes or cloaks, or simply vague shadows, but this isn't always the case.

Unlike the psychopomp beings like the Death Spirits and Shinigami, which their main task is to escort spirits to the afterlife in order to be judged, Wraiths tend to do the opposite, since they technically absorb souls to quench their hunger, and/or to remain in existence depending on the deviating depictions. 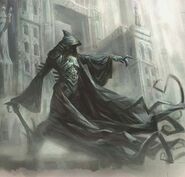 An example of a wraith.

Dementors (Harry Potter) are a dark of wrathlike creatures.

The Nazgûl/Ring-wraiths (Lord of the Rings) are powerful users of this power.

Ethan G. Warren/Fallout (Marvel Comics), an atomic wraith-like enemy of Wolverine from the days of WWII. 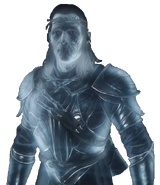 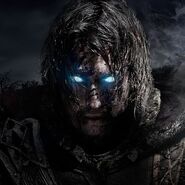 Ever since Veleena had been absorbing helpless souls and hijacking their physical vessels, the citizens of Shuggazoom have been converted into Wraiths (Super Robot Monkey Team Hyperforce Go!). While they do have the physiological power sets that Wraiths have, the most fearsome ability they all possess, is to wraithify their victims.

A wraith (Supernatural) activates a spike from her wrist.

Time Wraiths (The Flash) are guardians of the Speed Force of Reality and Time, they can only be defeated by sound based attacks.
Add a photo to this gallery

Mortal Kombat X - official trailer (2015)
Add a photo to this gallery
Retrieved from "https://powerlisting.fandom.com/wiki/Wraith_Physiology?oldid=1725618"
Community content is available under CC-BY-SA unless otherwise noted.