The Butcher (DC Comics) is the embodiment of Rage in the DC Universe who was born from the very first blood spilt by a murder.

Become the embodiment of wrath.

"Doctor Banner. Now might be a really good time for you to get angry."
"That my secret Cap, I'm always angry."
― Stever Rogers and Bruce Banner (The Avengers)

Users can become a physical manifestation or personification of wrath in their reality and gains power from the anger in others or oneself. Users can use anger and endless rage as a power source to extend their life span or as a weapon. They can become immune to death unless certain conditions are met. They can also embodiment the hatred, the violence, the vengeance and the war, concepts related to wrath.

Yammy Llargo (Bleach) represents wrath amongst the Espada, and gains strength and size from being angry when he uses his Resurrecion, "Ira", potentially infinite.

Skinn Bolic (D.Gray-man) is the Noah of Wrath, and his power over lightning and unstable anger are representations of that.

Elana, the Squalid Queen (Dark Souls II) is the fragment of Manus' soul that represents his wrath.

Very little can withstand the onslaught of Kratos (God Of War). Capable of massacreing several mythical creatures, Kratos can kill what would usually be unkillable.

As the current incarnation of Dubhe, Keiro (Hero Tales) is considered a bottomless pit of rage and fury. 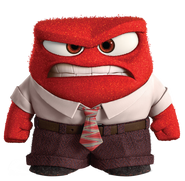 Anger (Inside Out) is the emotion and Riley's capacity to feel anger. His job is to make sure Riley's life is fair.

By possessing the 「Wrath」skill, Wrath/Sasajima Kyouya (Kumo Desu ga, Nani ka?) gains the title「Ruler of Wrath」 and with it can vastly increase all his stats, at the risk of going berserk.

As the incarnation of demon lord Demise's malice and rage/hatred, Ganondorf/Ganon (The Legend of Zelda) will be reborn repeatedly, locked in a cycle of eternal conflict with the Goddess (Princess Zelda) and the Hero (Link).

Mad Jack (Samurai Jack) is the manifestation of Jack's rage and frustration, given physical form by Aku.

Satan (Seven Mortal Sins) is the Demon King of Wrath, and as such is very short-tempered with a bad habit of starting fights. 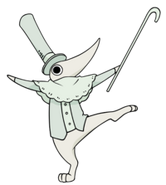 Excalibur (Soul Eater) is known to cause anger and irritation to everyone around him, and is strongly implied to embody and emanate the Madness of Rage.