Ichibē Hyōsube's (Bleach) Zanpakutō, Ichimonji, takes the form of a giant calligraphy brush, of which the brush part can turn into a small blade.

"How about a magic trick? I'm going to make this pencil disappear."
― Joker (The Dark Knight)

The user can release/use writing implements such as pencils, pens, brushes, and other types to form attacks of various shapes and/or intensities, either projected, used as a part of melee attacks, etc.

Timmy's Dad (The Fairly Oddparents) unintentionally launches a pencil barrage at the audience. 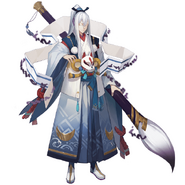