"I have eyes that can see, right through lead..."
― Metro Man (Megamind)

The power to see x-rays. Sub-power of X-Radiation Manipulation and Electromagnetic Vision. Not to be confused with Penetration Vision.

The user can see x-rays, electromagnetic waves of high energy and very short wavelength, which is able to pass through many materials opaque to light. This can be used for medical purposes such as the detection of cancers, tumors, blackened lungs, etc. The skill of perceiving a specific location (i.e. artery) is given by partial reflection of the ray from each specific surface surveyed.

In some cases, the user can actually emit x-rays from their eyes, producing an effect similar to Heat Vision. 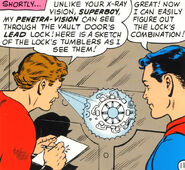 Ultra Boy (DC Comics) possesses penetra vision, a version of X-Ray vision which allows him to see through lead. 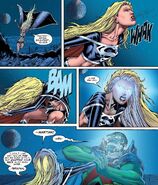 In addition to using it to see through matter, Superman (DC Comics) has been known to use X-ray vision offensively by simulating Heat Vision.

Clark Kent (Smallville) sees his friend clearer than ever

With a useful talent like X Ray Vision, Nurse Spex (Sky High) sends her patients with a creepy feeling along with some candy. 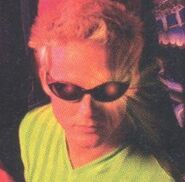 Kurt Pastorius alias Refrax (Marvel Comics) can fire thermal energy from his eyes as well as use X-ray vision.

Jess (Misfits) sees Rudy talking to someone locked in a freezer through a solid wall.

The Byakugan (Naruto) allow the user's vision to see through solid objects.

Falcon's Eye (Xiaolin Showdown) allow the user to see through solid objects and even in the dark.

Thanks to power of the Glare-Glare Fruit/Glare Glare no Mi, Viola (One Piece) can see X-ray.

Monkey D. Luffy (One Piece) using Kenbunshoku/Observation Haki to see people behind walls and buildings in order to sneak up behind them and knock them out.

X (Alphablocks) a user of X-ray visions by saying his own letter sound.

Chase (Lab Rats) Bionic eyes allow him to scan objects and see through them.

as well as setting a bridge on fire.

Jefferson Pierce/Black Lightning (Arrowverse/Black Lightning) has the ability to see through anything with an electric current without his suit. Which can also function in a similar manner as x-ray vision.
Português do Brasil
Community content is available under CC-BY-SA unless otherwise noted.
Advertisement