Mark Sim (Marvel Comics) has traits that resemble a Haechi and can assume the full form of the creature.

Use the traits of Xiezhi.

The power to use the abilities of Xiezhi. Variation of Mythical Bestiary and Divine Beast Physiology.

User of this ability either is or can transform into a Xiezhi (Korean: Haetae, Haitai or Haech, Japanese: Kaichi ) a legendary creature in Chinese and Korean folklore. They are described as having the mixed body of a lion and dog, occasionally with a horn. They are guardian against natural disasters and prejudice, and symbol of justice and order with fire-eating qualities.

In Chinese mythology, the xiezhi is credited with the power to distinguish between right, wrong, virtue, and evil. In situations, such as a quarrel or fight, they would use it's power to sense the wrong party, then reach out it's horn to touch the side which is wrong. It's upright nature is so uncompromisable, it will stand against those that are wrong  even if they are authority figures, such as emperors. 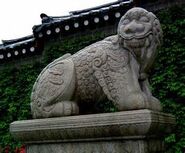 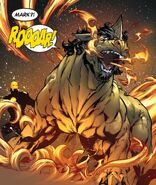 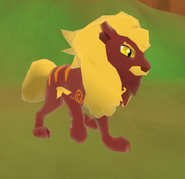 Haetea (Legends of Equestria)
Add a photo to this gallery
Retrieved from "https://powerlisting.fandom.com/wiki/Xiezhi_Physiology?oldid=1394953"
Community content is available under CC-BY-SA unless otherwise noted.