Create constructs from yin and yang.

The power to create/generate constructs from yin and yang. Sub-power of Yin & Yang Manipulation. Variation of Constructs Creation.

Users can change the forces of yin-and-yang into tools, objects, weapons and other items, create semi-living constructs and/or create structures/buildings of varying permanence. Users who have mastered this ability can use it for almost any situation, creating anything they need.

Obito Uchiha (Naruto) can shape his Truth-Seeking Balls into a variety of forms, stretching them for defense...

...the Sword of Nunoboko and a shield...

Having become the Ten-Tails' jinchūriki, Madara Uchiha (Naruto) can shape the Truth-Seeking Balls into weapons. 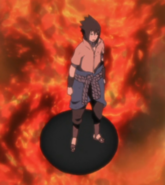 Sasuke Uchiha (Naruto) has shaped a Truth-Seeking Ball into a platform.

Using Golden Wheel Reincarnation Explosion, Toneri Ōtsutsuki (Naruto) forms a Truth-Seeking Ball into a massive sword capable of cleaving the Moon in half.
Community content is available under CC-BY-SA unless otherwise noted.