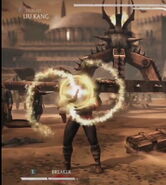 Kyurem (Pokémon) can merge with either Zekrom or Reshiram and control Yin and Yang, respectively.

Through the Tanden Engine, Seth (Street Fighter IV) controls both Yin/dark and Yang/light Ki.
Add a photo to this gallery
Retrieved from "https://powerlisting.fandom.com/wiki/Yin_%26_Yang_Manipulation?oldid=1438476"
Community content is available under CC-BY-SA unless otherwise noted.