"If the Yamato can separate man from devil... then what about the Rebellion?"
― Dante (Devil May Cry series)

The power to unify the complementary forces of yin and yang. Sub-power of Yin & Yang Manipulation and Combined Force Manipulation. Opposite to Yin & Yang Separation.

The user can unify the complementary forces of yin and yang of all beings and forces by unifying the fused forces or entities that can embody the combined essences of differing forces (day and night, love and hate, light and darkness, male and female, etc.).

The Visored (Bleach) use Hollowfication to fuse their Shinigami and Hollow powers, vastly enhancing their abilities.

As a Full Hollow, Ichigo Kurosaki (Bleach) had his Shinigami and Hollow powers completely merged into a single form,..

...and after his training by the Royal Guard, he achieved a fully stabilize unification of his spiritual powers as a Hollow, Quincy and Shinigami, granting him transcendent powers to match the Soul King.

...back into their completed self, Vergil.

Dante (Devil May Cry series) uses the Rebellion to fully unify his human and demon halves...

...allowing him to unlock his Sin Devil Trigger.

...to create nine tailed beasts from the Ten Tails.

Ryu (Street Fighter Unlimited) becomes Shin Ryu by unifying the dark ki of the Satsui no Hado and the light ki of the Power of Nothingness.

Jacen Solo (Star Wars Legends) unifies the light and dark sides of the Force in a state of perfect balance, achieving Oneness with the Force.

The Tiger Talisman (Jackie Chan Adventures) splits the user's Yin (light side) and Yang (dark side) halves into two separate beings and can also unify them back together.

As the carrier of the Tiger Talisman power, Sasha (Jackie Chan Adventures) can separate her Yin and Yang halves, and unify them again. 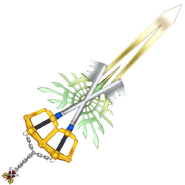 The χ-blade (Kingdom Hearts series) is created by the union of seven lights and thirteen darknesses.

The Witchblade (Witchblade/Top Cow) was born to the opposing forces of the Darkness and the Angelus to serve as a balance keeper between them; as a result, it possesses traits from both of its parents. 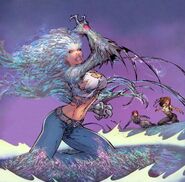 Lara Croft (Top Cow) using the Weave, a combination of the Angelus and the Darkness.

Yusuke Urameshi (Yu Yu Hakusho) unifies his spirit and demonic energy, allowing him to create his own sacred energy.
Add a photo to this gallery
Retrieved from "https://powerlisting.fandom.com/wiki/Yin_%26_Yang_Unification?oldid=1535127"
Community content is available under CC-BY-SA unless otherwise noted.