Use the traits of Yuki-onna.

The power to use the abilities of Yuki-onna. Variation of Yokai Physiology.

Users with this ability either is or can transform into a Yuki-onna (snow woman), a yokai who is either the ghost of someone who perished in the snow or a personification of winter and snow. Yuki-onna appears on snowy nights as a tall, beautiful woman with long black hair and blue lips, with inhumanly pale or even transparent skin that let them blend into the snowy landscape. Despite her inhuman beauty, her eyes can strike terror into mortals. She floats across the snow, leaving no footprints (in fact, some tales say she has no feet, a feature of many Japanese ghosts), and can transform into a cloud of mist or snow if threatened.

Yuki-onna, being associated with winter and snowstorms, are at the same time beautiful and serene, yet ruthless in killing unsuspecting mortals. Until the 18th century they were almost uniformly portrayed as evil, but modern stories often color them as more human, emphasizing their ghost-like nature and ephemeral beauty.

The Yuki-Onna (Nioh) is both a formidable and beautiful enemy.

Due to being a mix of Ice and Ghost-type Pokémon and being based on a Yuki-Onna, Froslass (Pokémon) possesses the powers of one, including being able to disappear in a blizzard. 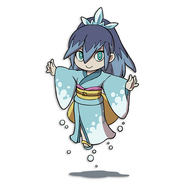 Akira (Kemono Jihen) is a Yuki-Otoko, a rare male version of a Yuki-Onna.
Add a photo to this gallery

SCP-1529 King of the Mountain (SCP Animation)
Add a photo to this gallery
Retrieved from "https://powerlisting.fandom.com/wiki/Yuki-Onna_Physiology?oldid=1696976"
Community content is available under CC-BY-SA unless otherwise noted.