The user can create, shape and manipulate Zero-Point Energy, the lowest possible energy that a quantum mechanical physical system may have; i.e. the vibrational energy retained by molecules even at a temperature of absolute zero. This energy can mainly be found in the vacuum of space.

Wes Weasley (The Adventures of Sonic the Hedgehog) sells Robotnik the Gravity Stopper, which fires off a zero-point energy ray that causes the target to lose all energy and float in midair.

A Zero Point Module or ZPM (Stargate Atlantis) is a piece of Ancient technology capable of drawing large amounts of clean energy from a pocket of subspace and is capable of producing 100-200 Terawatts of power for a duration of 3,500 years or holding off the constant bombardment of a city by enemy ships for three straight days. 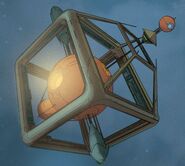 Sardeth of Rann had created a perfection of his Zeta Beam called the Omega Beam (DC Comics) which utilized the inexhaustible power source of Zero Point Energy to convert matter to energy and back for interstellar to transdimensional transport.

Syndrome (The Incredibles) possess gauntlets which allow him to fire beams of Zero Point Energy to immobilize targets.
Community content is available under CC-BY-SA unless otherwise noted.
Advertisement