Ernest Fairchild/Evil Ernie (Chaos!/Eternity Comics) is an all but unstoppable living corpse who utilizes his Arcane Energies to control the undead and incite megadeath.

"They say the Zombie Master controlled these foul creatures even before his own death, but now that he is one of them, nothing can make them betray him."
― "Zombie Master" card flavor text, Magic: The Gathering

"It appears that there is some sort of hierarchy to the zombie hordes. Some are more intelligent than most and seem to give them directions. Perhaps our original theories were wrong."
― Dr. Einer Saukas, discovering there's a hierarchy in the Zombie outbreak, when he witnessed some of them being smarter and formidable, and also giving the lesser Zombies orders. (They Hunger)

The power to possess the traits of a lord of the Walking Dead. Advanced version of Zombie Physiology. Variation of Undead Lord Physiology.

The user is or can become an all but unstoppable Zombie Lord; one of the most powerful forms of undead. As king of the undead they retain their rational sense of self-awareness, being able to think, plan and articulate their actions and motions.

Being the lord of the undead, may give a user undisputed power over all types of lifeless corpse types be it Revenants to Skeletons, Flesh Golems, Radioactive Zombies, Mutant Zombies, Metazombies, Mummies, Ghouls, even Zombie Hybrids may fall under their sway. Like any alpha of a species the Zombie Lord has greatly superior physical attributes, most prominently the corpse in question will be moved by powerful forces that give them phenomenal and malefic powers.

A Zombie Lord is incredibly difficult if not impossible to truly dispatch, their ability as such is their all but unassailable tenacity. No matter what one does with them they can never truly be stopped forever they can only do so momentarily, and be detained more often. 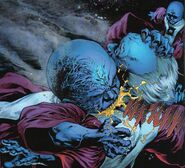 After becoming the host of the Black Lantern Corps, Scar/Scarred Guardian (DC Comics) had became the lord of the Zombies, except being below William Hand/Blackhand.

After becoming infected by a green, mysterious man-made pathogen, in conjunction of trying to cure himself, it was all too late, instead, Calder (Dead Rising 4) was turned into a Zombie Lord; therefore retaining his intellect.

Mariska (Lollipop Chainsaw) one of five Dark Purvayors had the ability to command the actions of lesser zombies.

Bob Zombie (Monster Madness) is an undead jamaican hispter rap singer who uses his hoodooistic powers to conjure and command an army of the dead.

Compared with the rest of the Zombies that are by nature mindless and hungry for brains, Dr. Edgar George Zomboss (Plants Vs. Zombies series) is the mastermind behind the reanimations of the Zombies as well as the one ruling them all, in addition to retaining his great intellect and sentient consciousness. 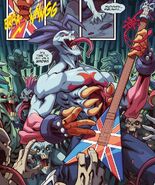 Reanimated for the purpose of tyranny over Europe and reanimating the dead to roam across the Earth, Heinrich I (Return to Castle Wolfenstein) has superior control over the undead.
Add a photo to this gallery
Retrieved from "https://powerlisting.fandom.com/wiki/Zombie_Lord_Physiology?oldid=1746901"
Community content is available under CC-BY-SA unless otherwise noted.