Romulus (Undead Knight) can turn people into zombies and control

The user can create, manipulate and destroy zombies, to work or anything the user wants.

T-Virus (Resident Evil) can control them by instinct.

The real zombies portrayed in Haitian culture are controlled by sorcerers that invoked and that only they can put them to death.

With the Darkness ÄRM, Grave Hail, Halloween (Marchen Awakens Romance) can call his victims from the dead and control them. 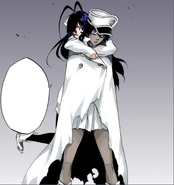 As Sternritter "Z" - The Zombie Giselle Gewelle (Bleach) anyone who cuts her and has Giselle's blood splattered on them completely becomes a zombie under her control. For example her dead friend Bambietta.

Thriller (Michael Jackson's Thriller)
Add a photo to this gallery
Retrieved from "https://powerlisting.fandom.com/wiki/Zombie_Manipulation?oldid=1569327"
Community content is available under CC-BY-SA unless otherwise noted.